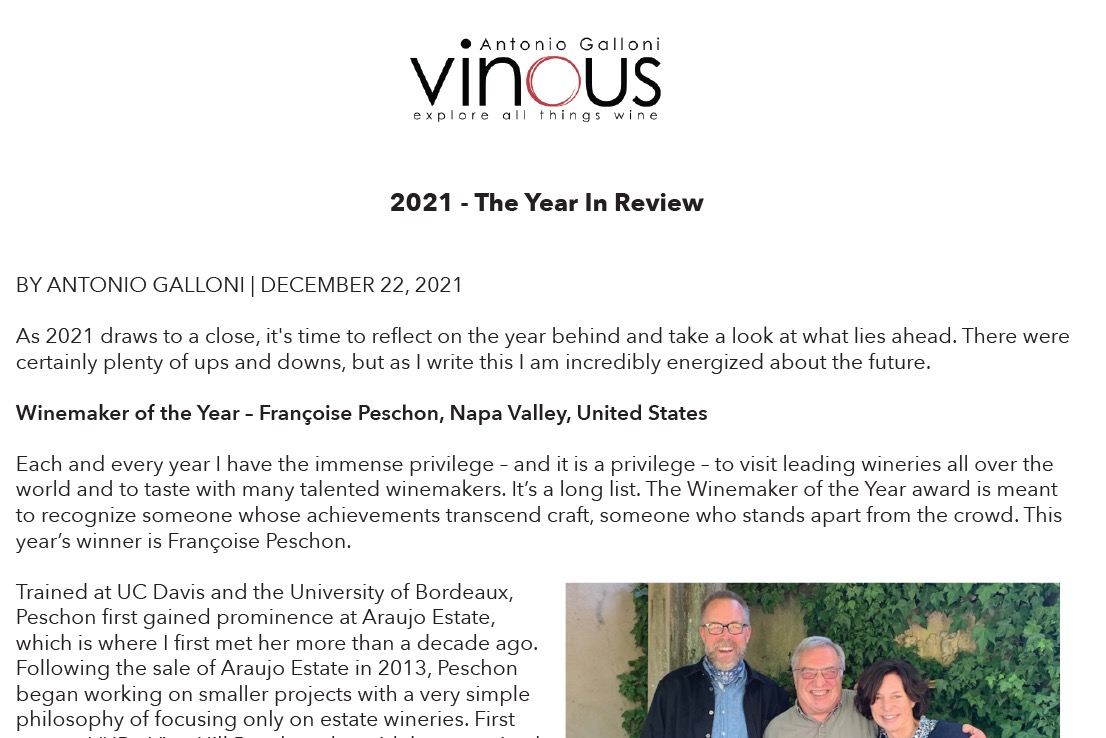 2021 Winemaker of the Year - Françoise Peschon

As 2021 draws to a close, it's time to reflect on the year behind and take a look at what lies ahead. There were certainly plenty of ups and downs, but as I write this I am incredibly energized about the future.

Each and every year I have the immense privilege - and it is a privilege - to visit leading wineries all over the world to taste with many talented winemakers. It's a long list. The Winemaker of the Year award is meant to recognize someone whose achievements transcend craft, someone who stands apart from the crowd. This year's winner is Françoise Peschon. 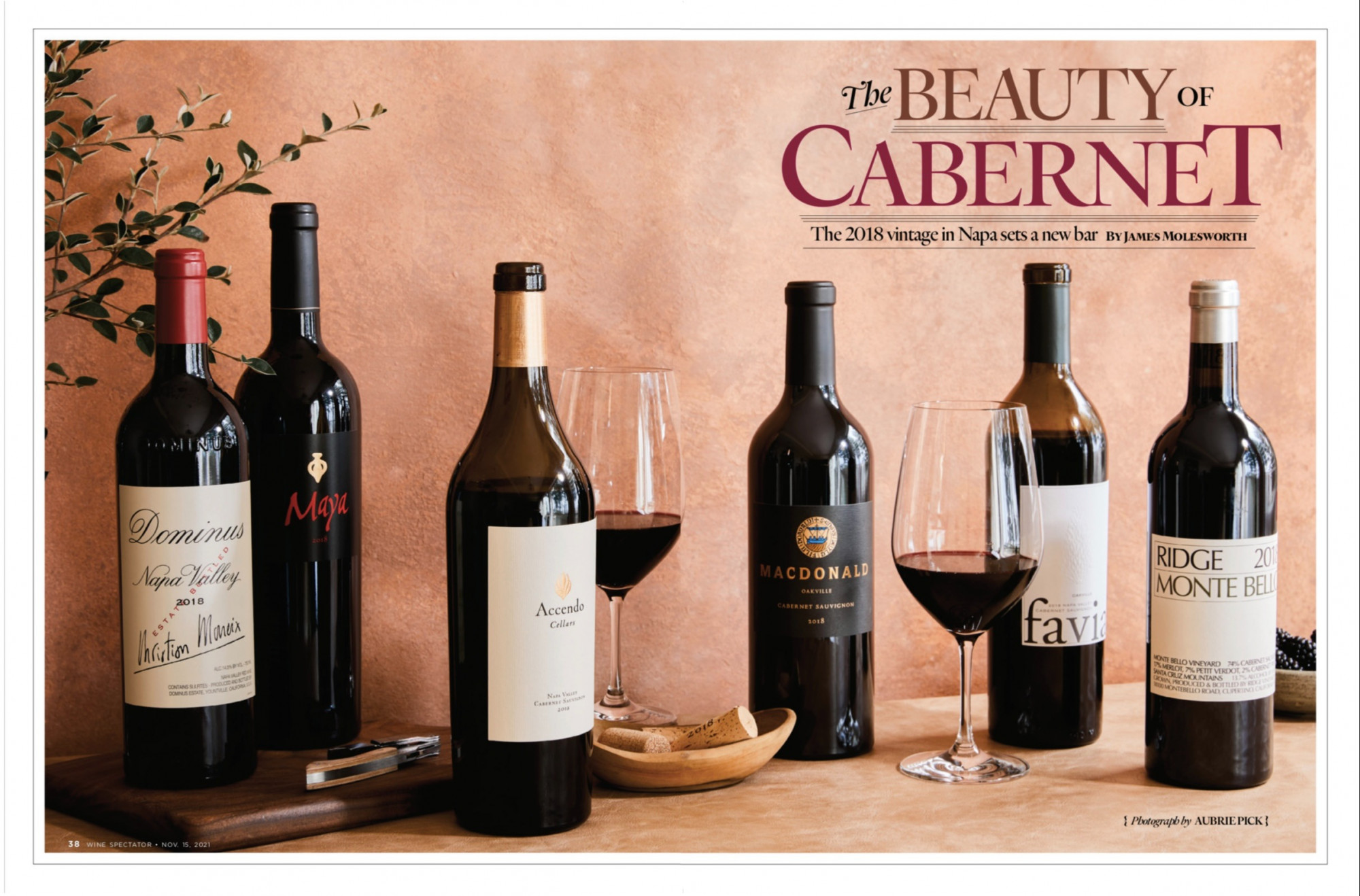 The Beauty of Cabernet: The 2018 vintage sets a new bar

Cabernet Sauvignon from Napa Valley has built a “can’t miss” reputation. This is true across California, but especially so in Napa, where there are rarely difficult vintages and the grape has become the region’s unquestioned lead player, representing more than half of the valley’s total plantings (23,500 acres, up from 18,246 acres in 2010). The result has been an ongoing string of excellent vintages...top 2018s in this report include the Accendo Cabernet Sauvignon Napa Valley 2018 (97, $365). 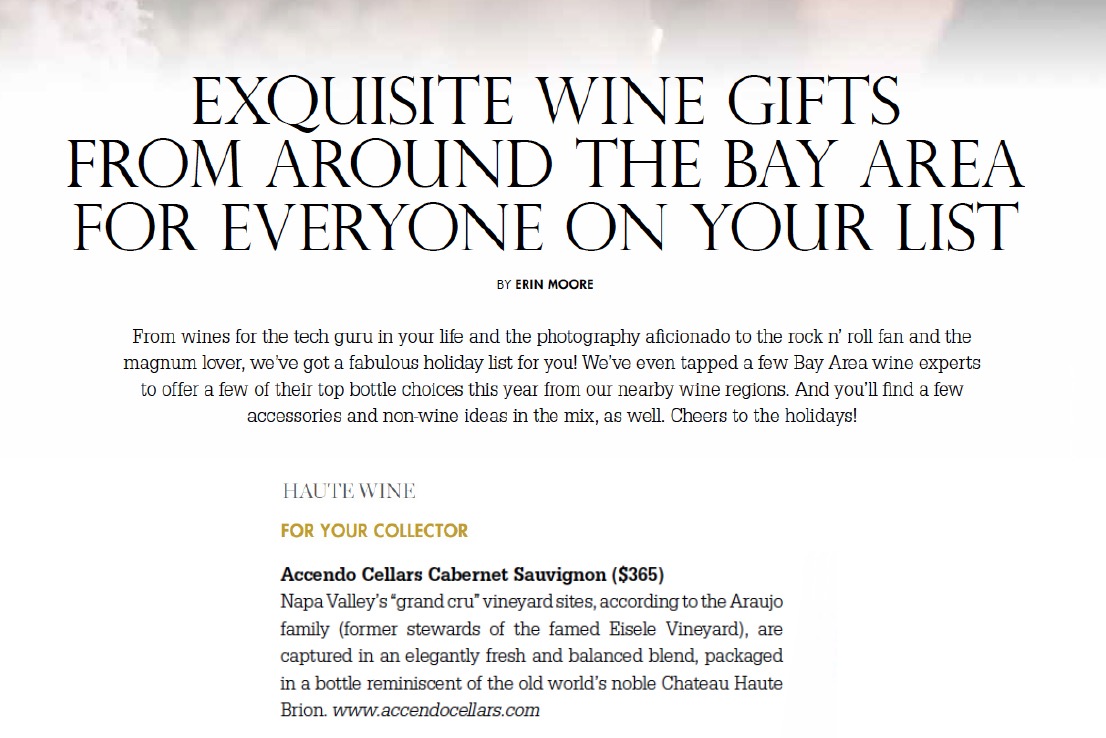 From wines for the tech guru in your life and the photography aficionado to the rock n’ roll fan and the magnum lover, we’ve got a fabulous holiday list for you! We’ve even tapped a few Bay Area wine experts to offer a few of their top bottle choices this year from our nearby wine regions. And you’ll find a few accessories and non-wine ideas in the mix, as well. Cheers to the holidays! 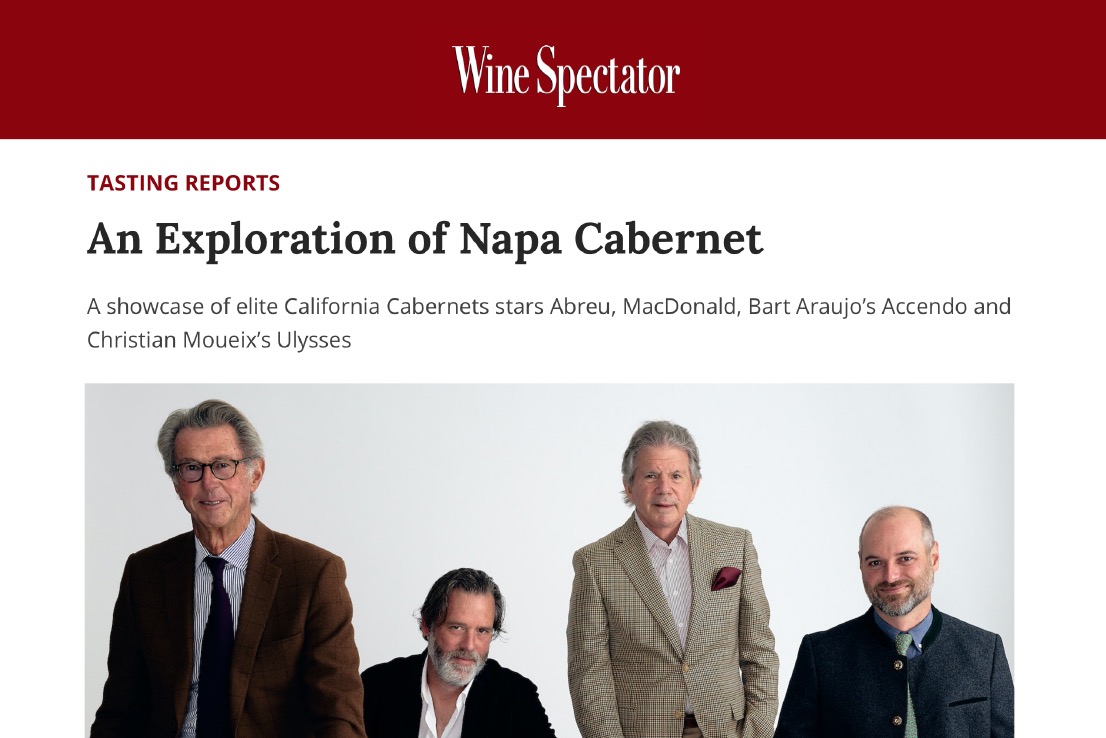 An Exploration of Napa Cabernet

The winemaking and grapegrowing styles of California Cabernet Sauvignon were on full display at the Wine Experience on Friday in a seminar featuring four stellar wines from Napa Valley. Moderated by Wine Spectator senior editor James Molesworth, the seminar was an exploration of the philosophical and historical factors that influence how grapes are grown, how wine is made and how those factors enrich the final product. 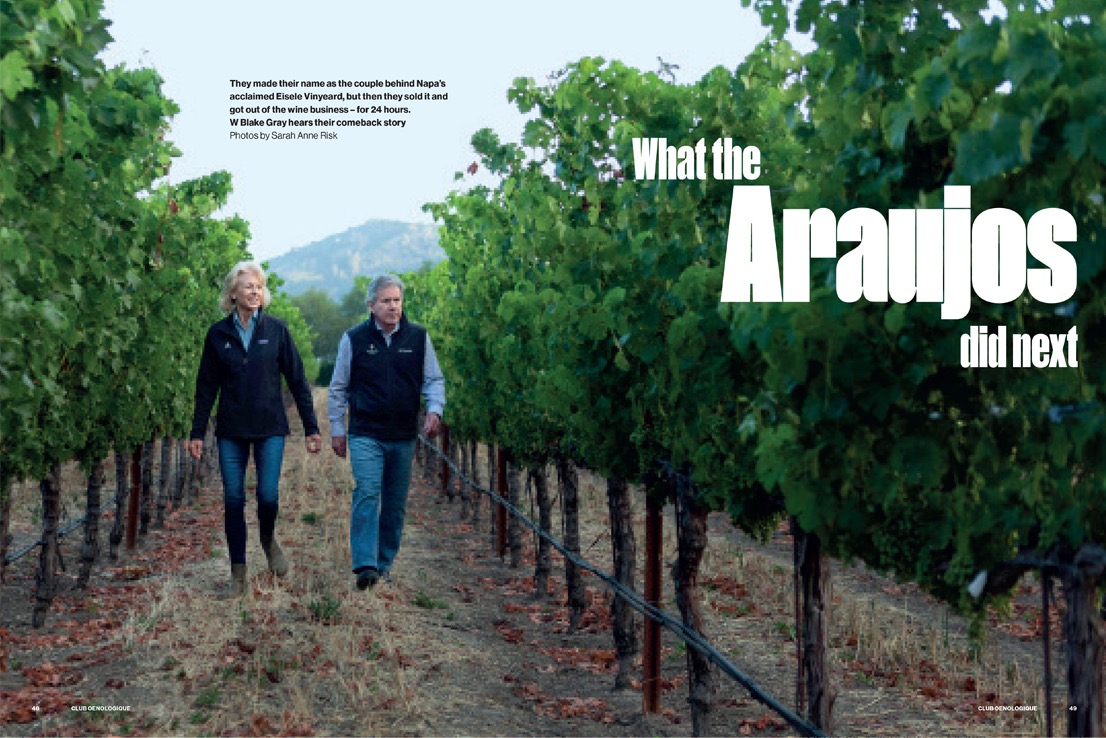 What the Araujos did next

For 23 years, Bart and Daphne Araujo owned Eisele Vineyard, arguably the most vaunted vineyard in Napa Valley. And now they don't. Instead, they have a new winery, Accendo, where they make fine wine from vineyards they don't own, dotted around the valley, emulating both the approach and style of Napa winemakers of the 1970s. But while the vineyard sources are impeccable, non will ever have the pedigree of the one they sold.

During their time owning Eisele, the Araujos cemented its name in Napa folklore. They completely renovated the vineyard, replanting all the vines, which were threatened by phylloxera. 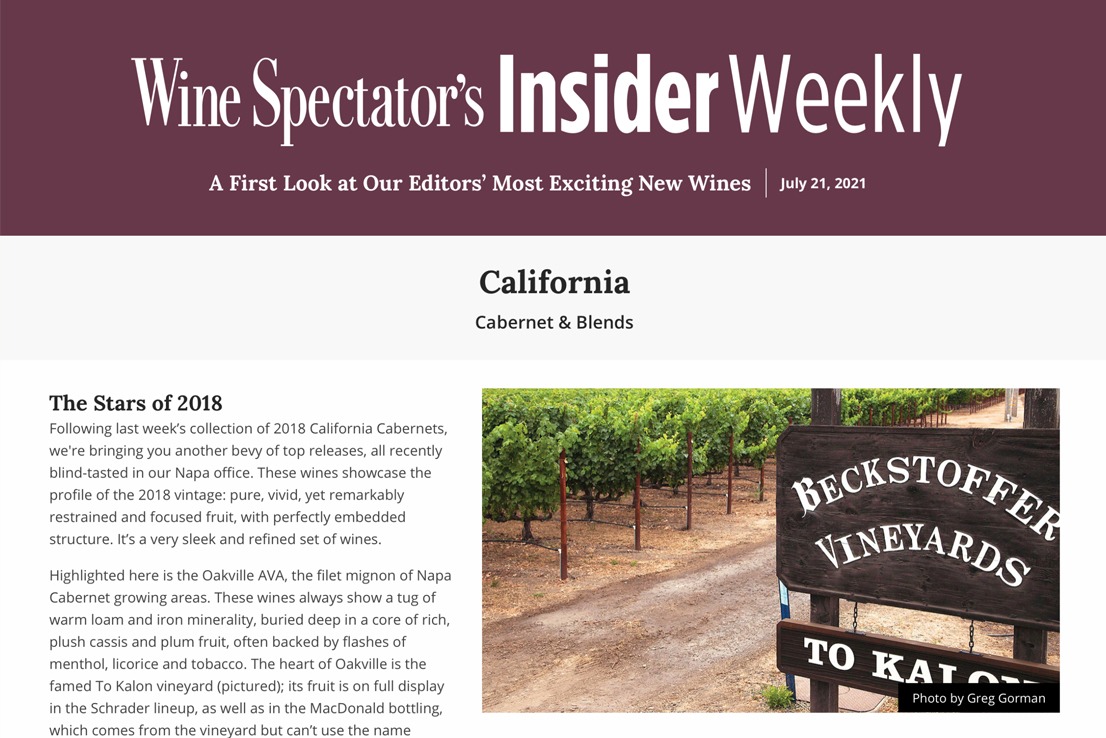 Following last week’s collection of 2018 California Cabernets, we're bringing you another bevy of top releases, all recently blind-tasted in our Napa office. These wines showcase the profile of the 2018 vintage: pure, vivid, yet remarkably restrained and focused fruit, with perfectly embedded structure. It’s a very sleek and refined set of wines.

Highlighted here is the Oakville AVA, the filet mignon of Napa Cabernet growing areas. These wines always show a tug of warm loam and iron minerality, buried deep in a core of rich, plush cassis and plum fruit, often backed by flashes of menthol, licorice and tobacco. 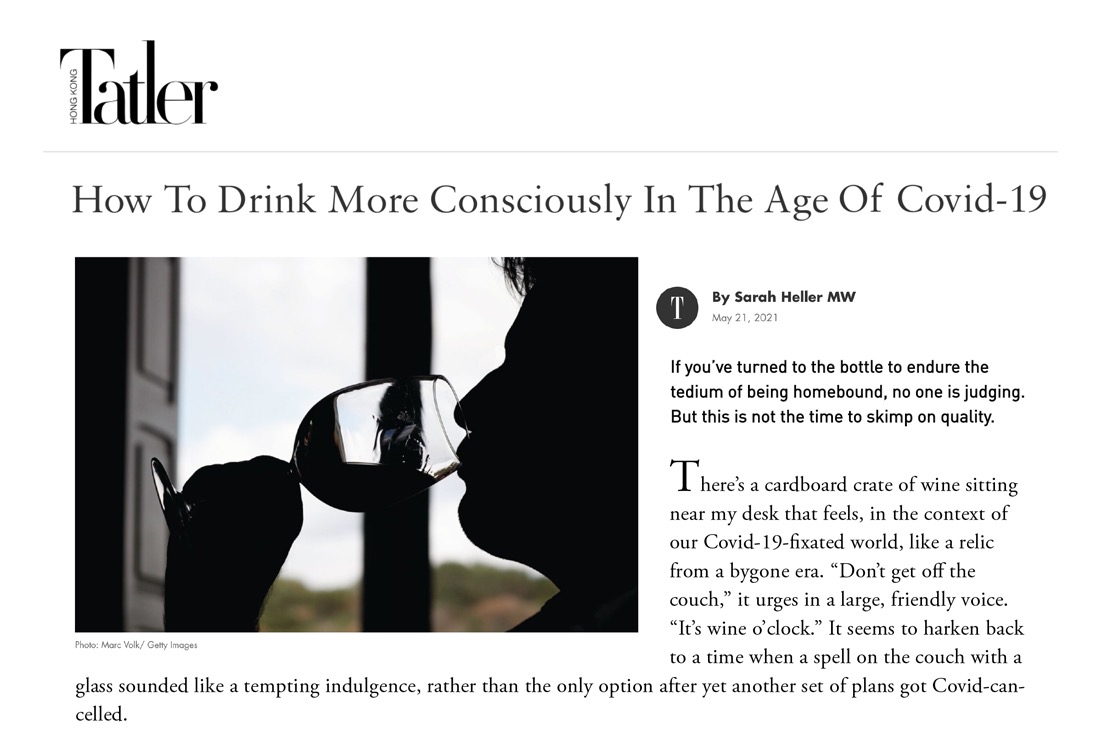 How To Drink More Consciously In The Age Of Covid-19

There’s a cardboard crate of wine sitting near my desk that feels, in the context of our Covid-19-fixated world, like a relic from a bygone era. “Don’t get off the couch,” it urges in a large, friendly voice. “It’s wine o’clock.” It seems to harken back to a time when a spell on the couch with a glass sounded like a tempting indulgence, rather than the only option after yet another set of plans got Covid-cancelled.

Indeed, who among us has not logged more couch time than we ever thought possible? In this work-from-home, learn-from-home, play-from-home era, it’s certainly understandable to seek a little escapism through wine, which, with its inextricable link to its place of origin, can transport us to remote places and eras, at least in our minds.

Listen to the Interview 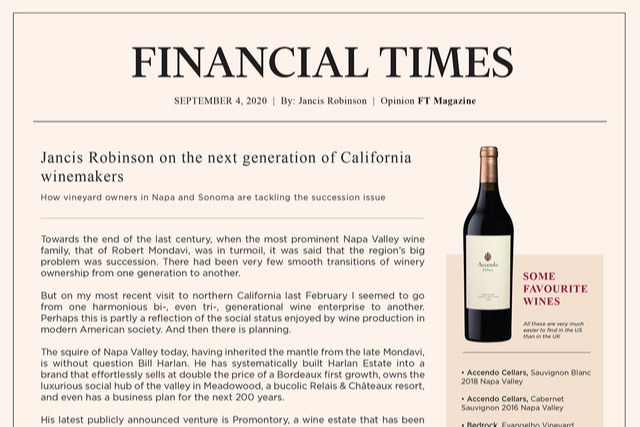 Jancis Robinson on the next generation of California winemakers

But by no means all next generation-ers are male. Jaime Araujo’s parents established the widely admired, biodynamically run Araujo Estate so successfully that they were made an oer they couldn’t refuse by François Pinault’s wine group. Renamed Eisele Vineyard, it is now a sister operation to Ch Latour of Pauillac.

The Araujo parents have since set up from scratch once more, their new label being Accendo, made at their upmarket custom-crush facility Wheeler Farms. 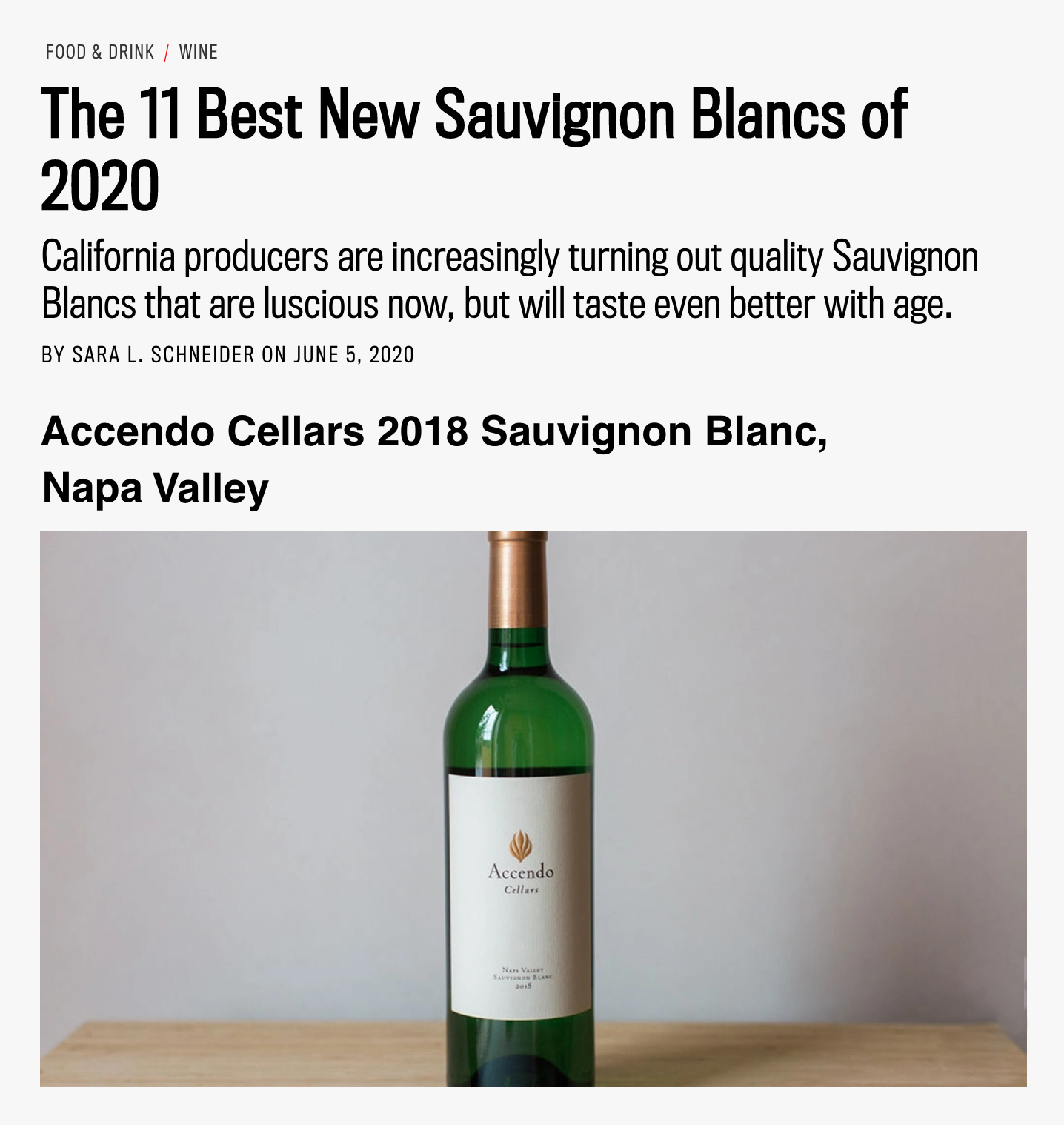 A second iteration for Napa’s Araujo family, Accendo is making top-notch Sauvignon Blanc a priority, with the help of consulting winemaker Michel Rolland and viticulturist Steve Matthiasson. This vintage—made in a mix of new and used French oak, concrete and stainless-steel drums, and aged sur lie—is an exquisite, complex example of the best Napa can produce. A spiced sachet of aromas includes fragrant jasmine, guava and hints of vanilla, and an orchardful of citrus (grapefruit, tangerine, lime zest) is rounded out by peach flavors, with vivid tension balanced by elegant creaminess. 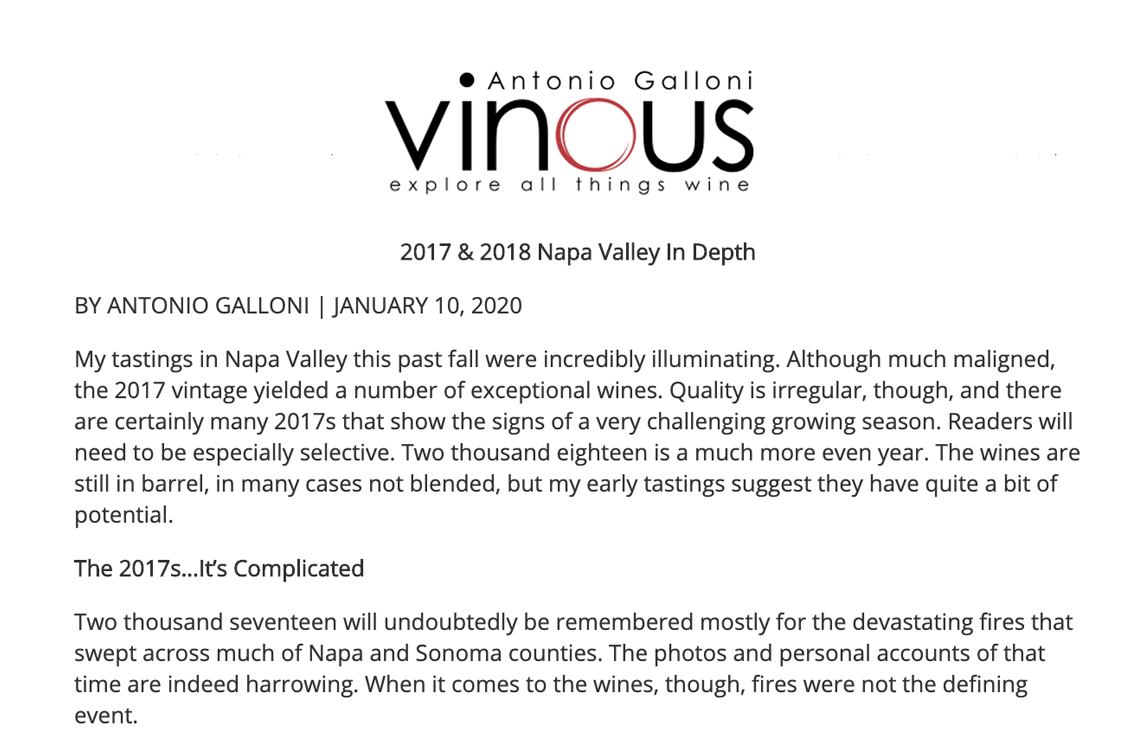 Bart and Daphne Araujo's Accendo wines keep getting better. The 2018 Sauvignon Blanc is the finest vintage of that wine yet. In Cabernet land, the Araujos continue to refine their approach to the sites they work with. Their 2017 Cabernet is fabulous; the 2016 is just as terrific as it was last year, and the 2018 (which I tasted from separate components) is looking like it, too, will be stellar. Going back to the 2017 for a second, a big part of what makes that wine special is that it was made at the Araujos' state of the art Wheeler Farms custom crush facility, designed by winemaker Nigel Kinsman. Equipped with generator power and the most modern equipment, Wheeler Farms operated through the October 2017 fires with no interruptions, which is quite remarkable. 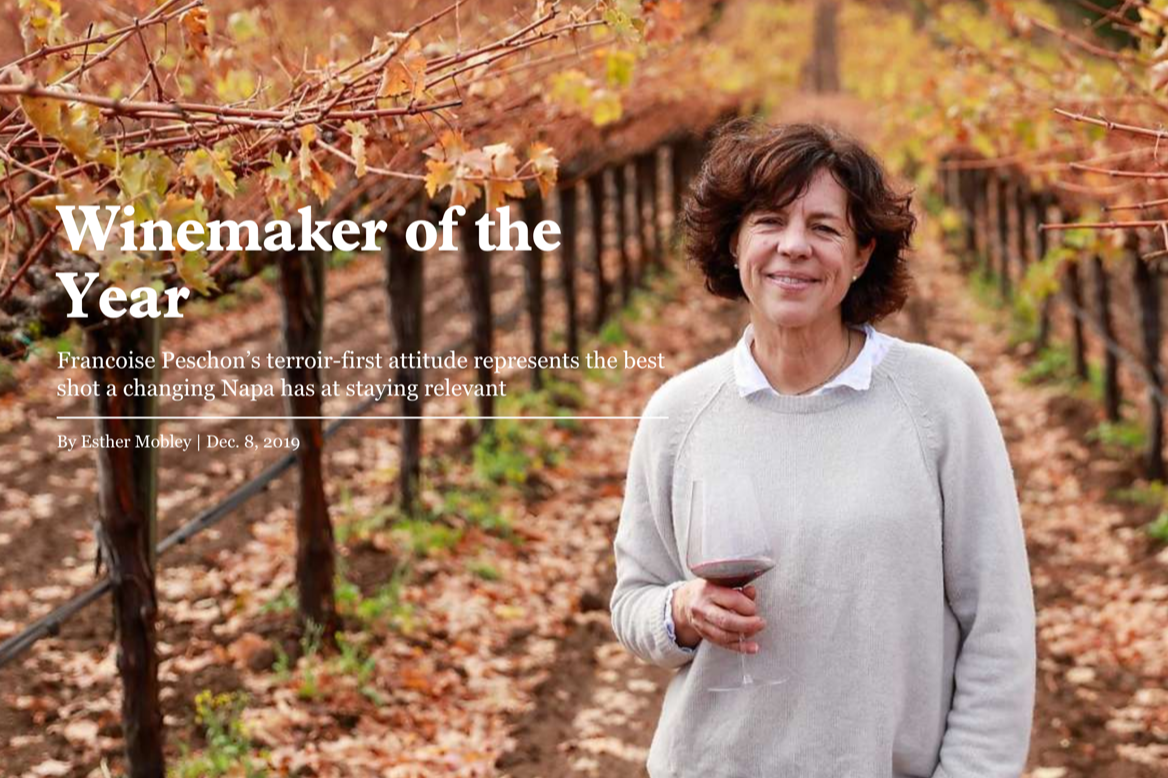 2019 Winemaker of the Year: Françoise Peschon

It’s in vogue for winemakers to deny that they impose “style” on their wines, to say they’re merely letting the vineyard speak. Peschon’s tendency to downplay her own role is earnest, but it’s also not entirely accurate. “She says it’s all the vineyards,” says Accendo Cellars owner Bart Araujo. “Well, I’m sorry, it’s not quite that simple. There has to be a shepherd. Francoise seems to have this intuitive ability to respect the science but also move beyond it, to a place of creativity.” 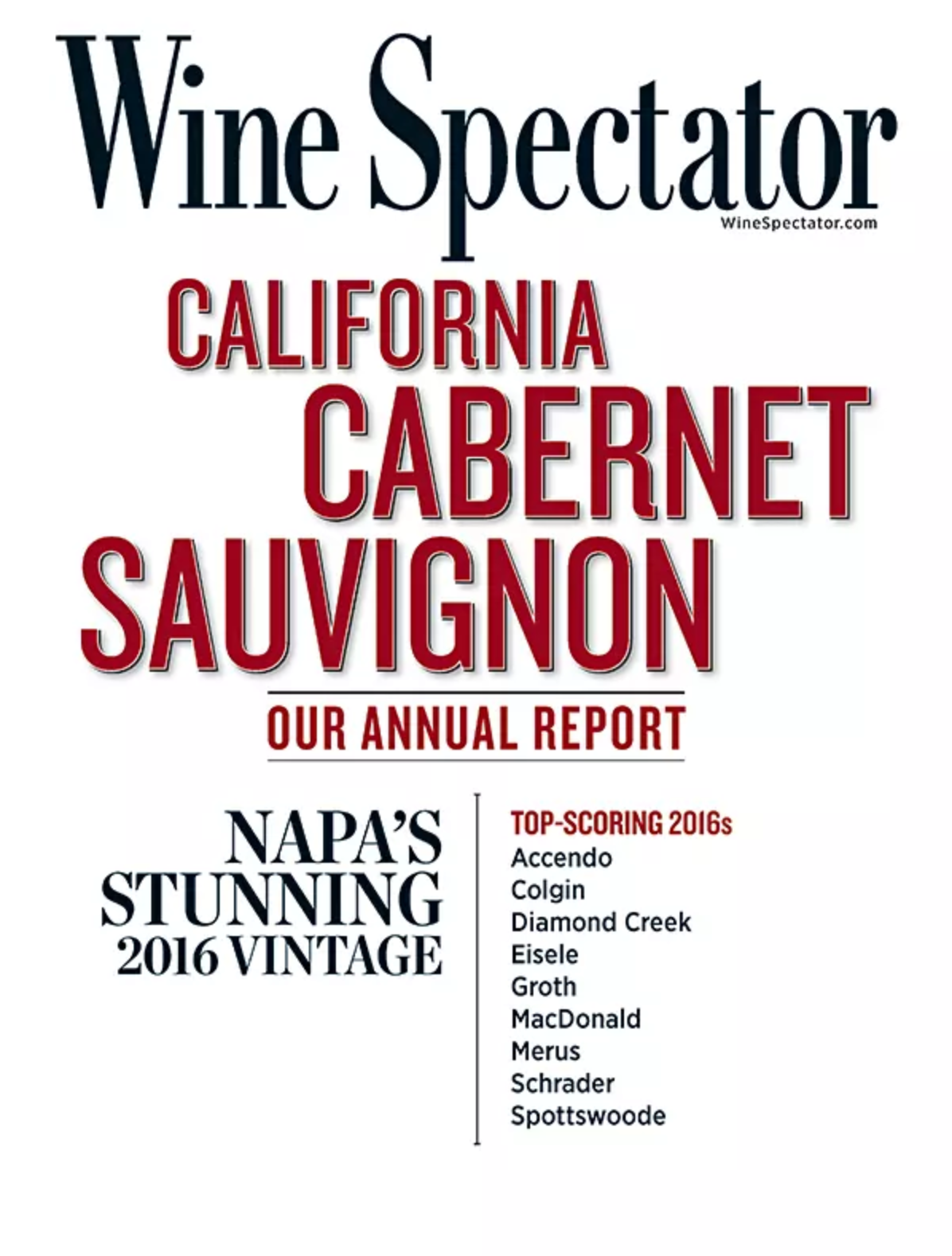 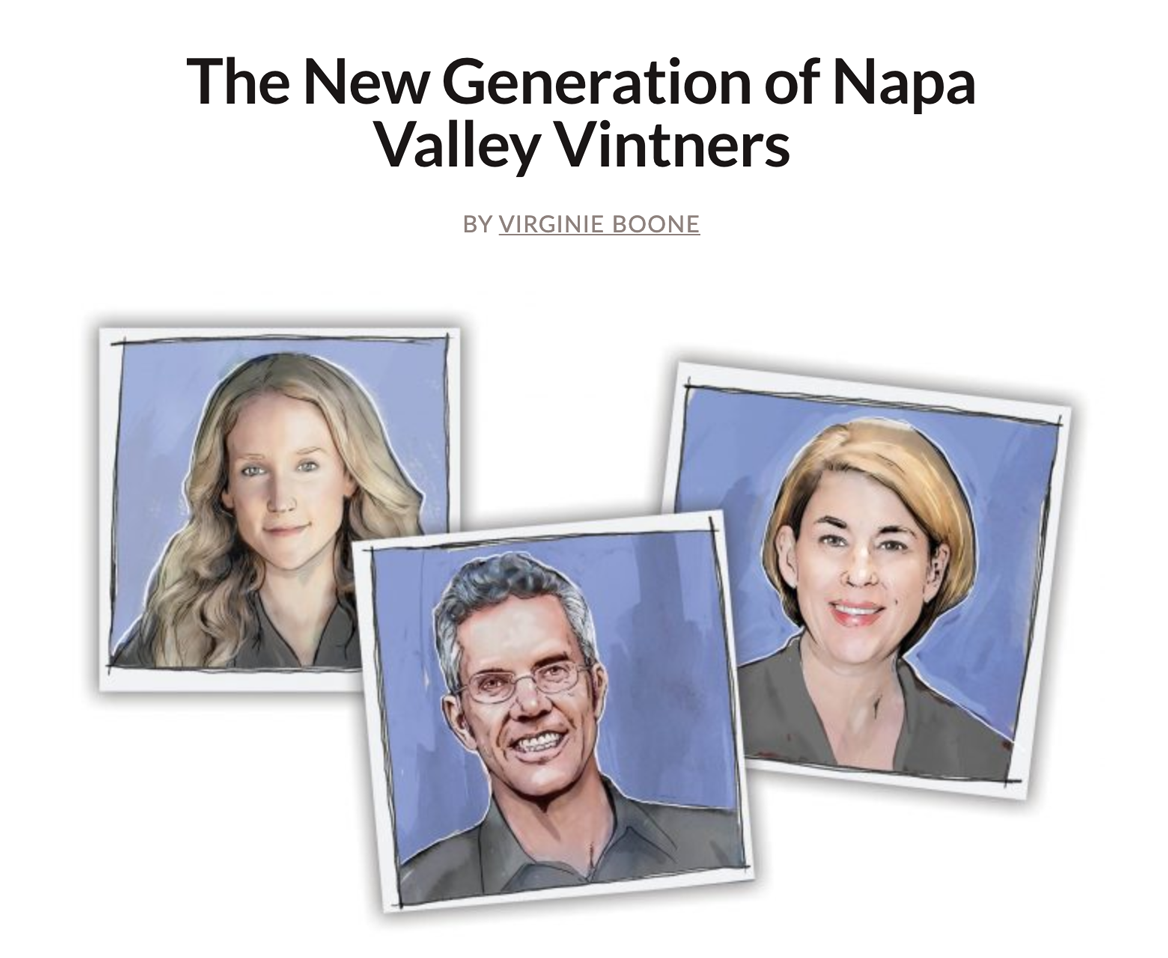 “You can’t have a successful multigenerational business without tapping into 100% of the talent. My dad [Bart Araujo] has this expression that he doesn’t want to be 100% better than anyone. He wants to be 1% better in a hundred different ways. There’s no such thing as repeating your success in wine. It’s chaos theory meets alcoholic beverage. You always have to find new ways of looking at things.” - Jaime Araujo interviewed by Virginie Boone 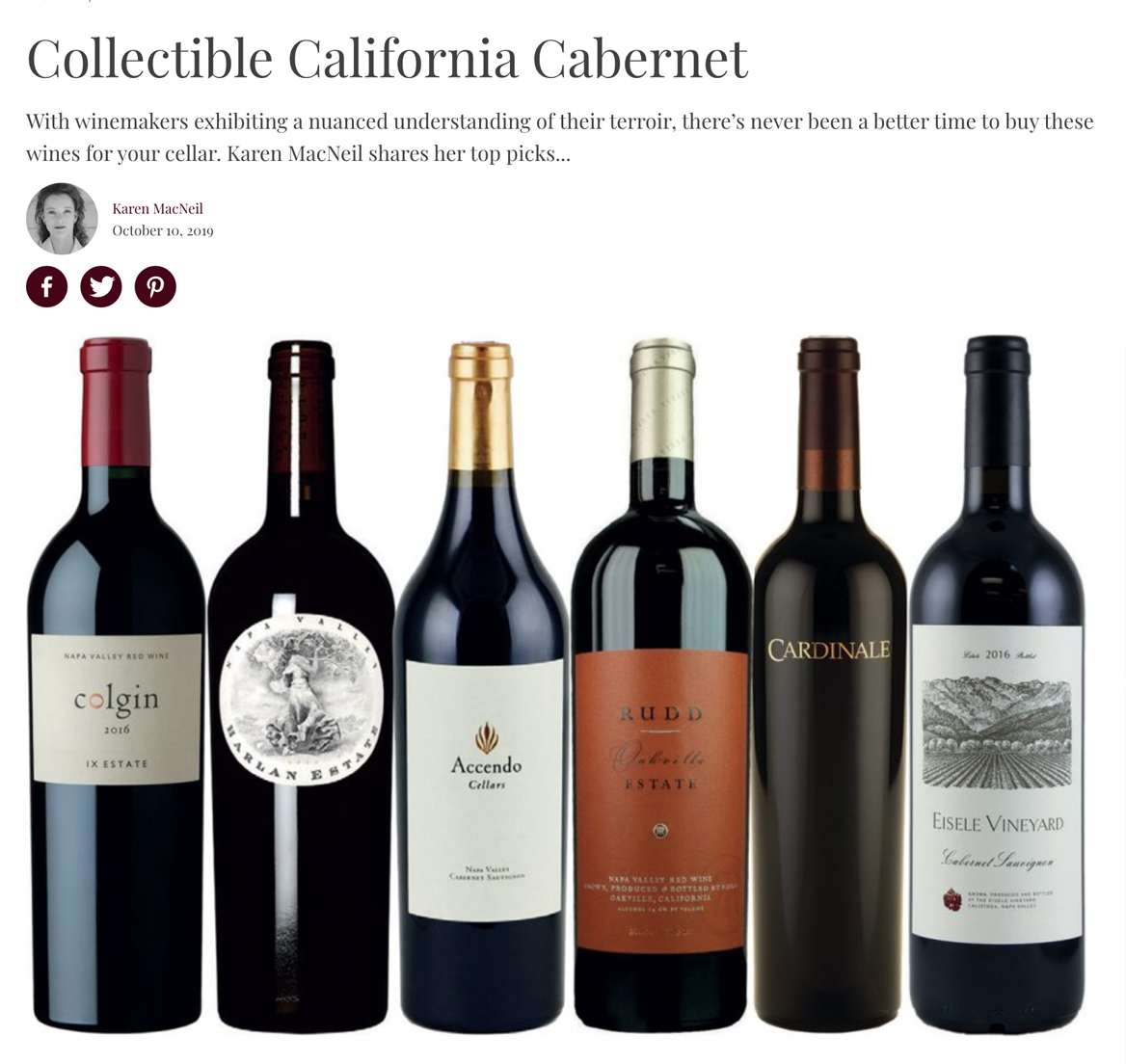 After selling the Araujo estate along with the Eisele Vineyard to François Pinault of Château Latour in 2013, Bart and Daphne Araujo founded Accendo (Latin for kindle, illuminate, inflame) in the heart of the valley. Their longtime winemakers Françoise Peschon and Nigel Kinsman moved with them. The 2016 soars with savory flavors and wonderful minerality. A relatively high percentage of Cabernet Franc for this estate gives the wine exquisite baritone richness. Already it’s a wine of finesse, without a shred of heaviness. 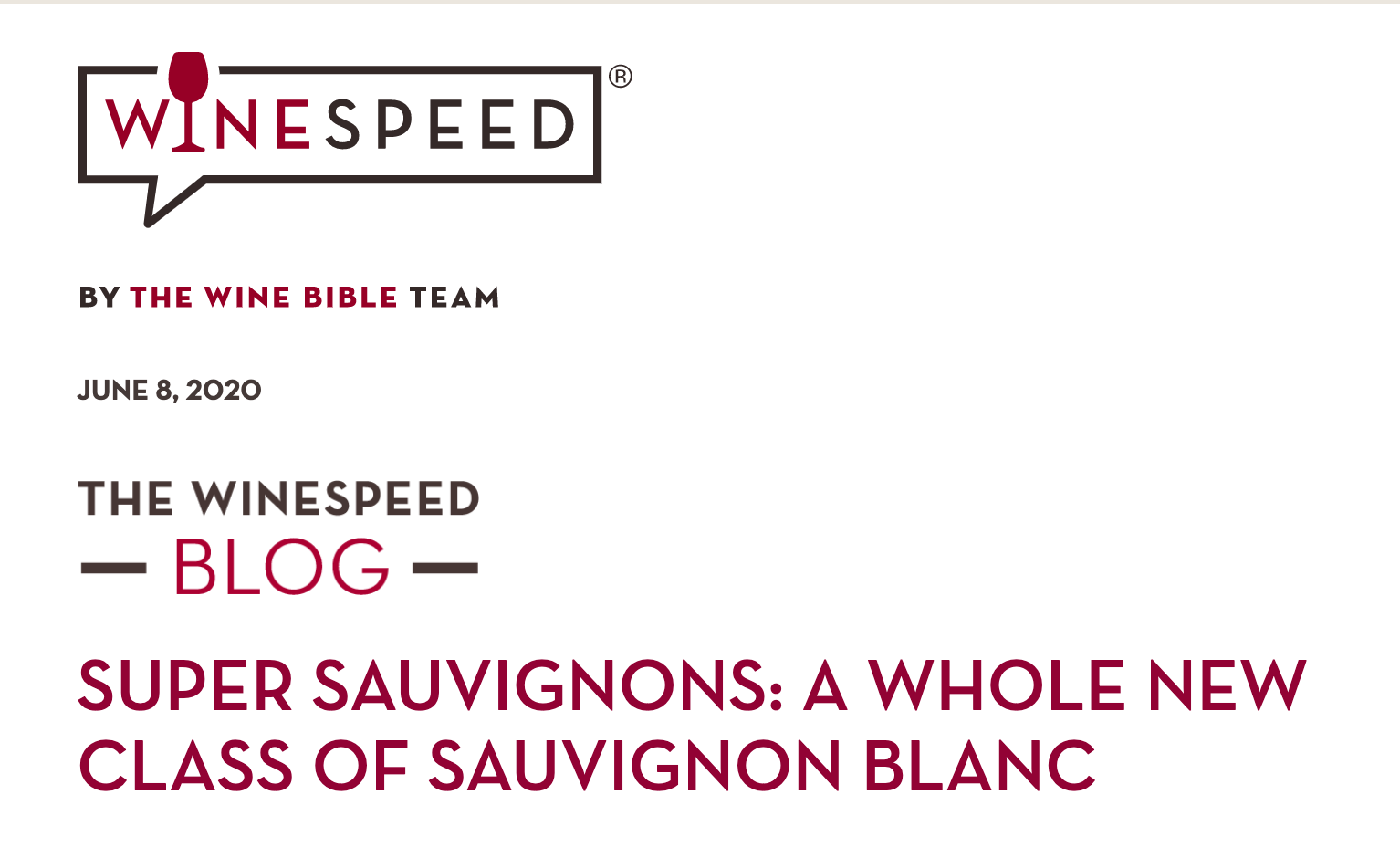 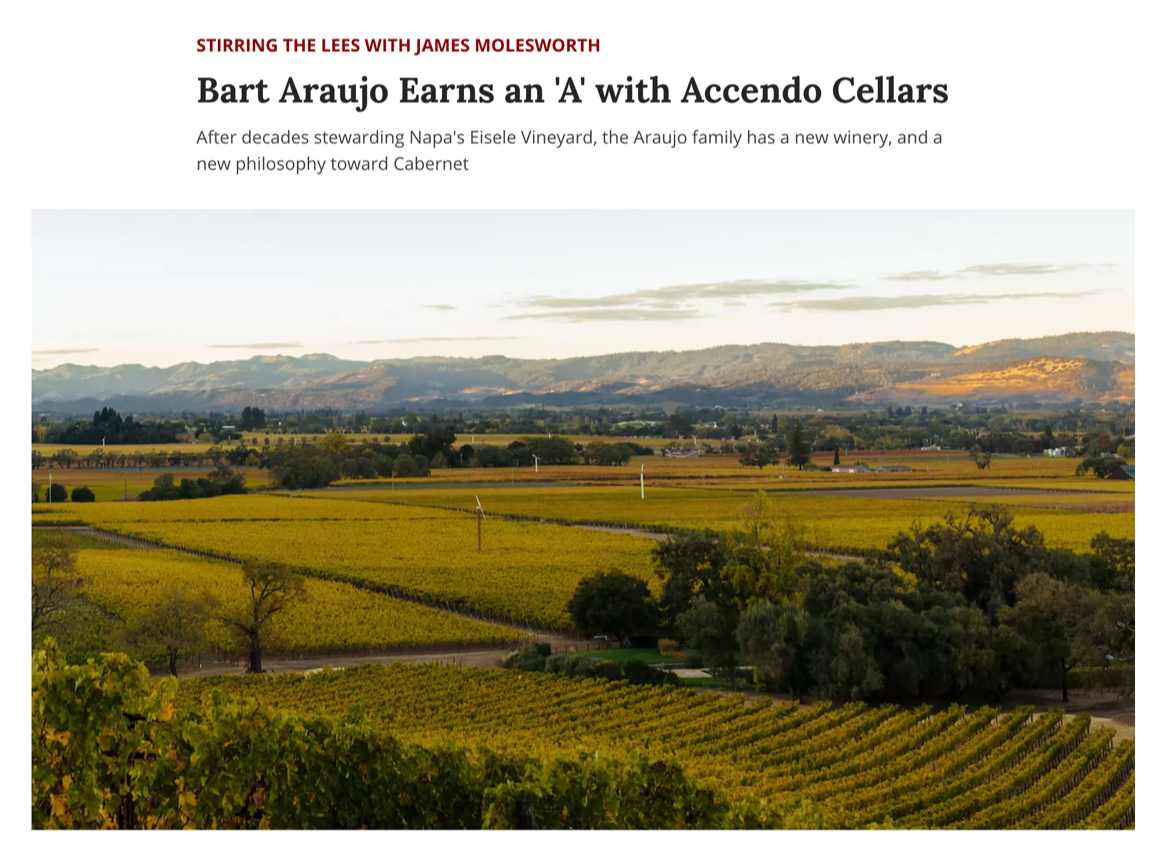 Bart Araujo Earns an 'A' with Accendo Cellars

When the Araujos arrived in Napa and purchased Eisele Vineyard in 1990, they were seen as outsiders, with some questioning what might happen to such an iconic vineyard in the hands of new-to-wine owners. During their tenure, the Araujos elevated Eisele Vineyard to new heights. With Accendo, they're paying homage to Napa's past while fashioning a wine in a more modern vein, and they're doing so by letting the wine dictate itself. No one is questioning them now. 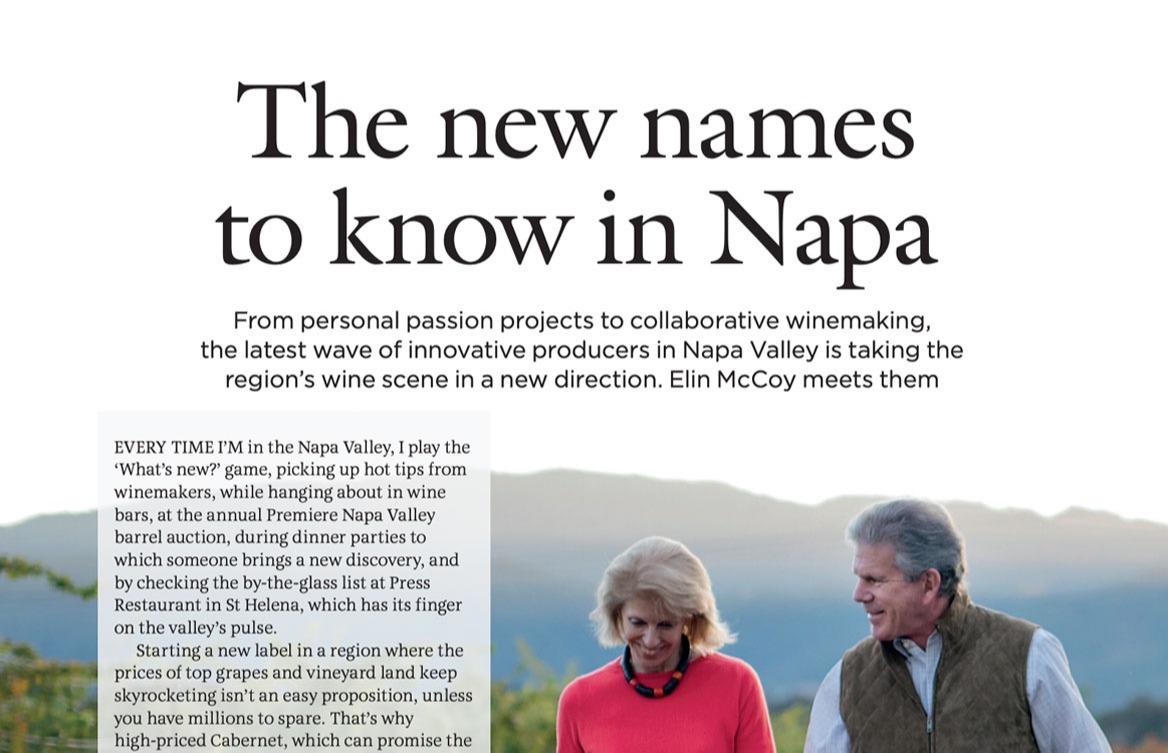 The new names to know in Napa

Bart and Daphne Araujo are hardly new names. They spent 25 years burnishing the reputation of Araujo Estate and its legendary Eisele Vineyard before selling it to François Pinault, owner of Château Latour, in 2013. But they soon plunged into a very different project, whose wines debuted under their new Accendo Cellars label two years ago. (The Latin word accendo means ‘to inflame or arouse’.) Rather than create a single-vineyard red, they’re blending purchased fruit from friends’ top vineyards with their own plots in St Helena and Oakville to make an elegant, lushly fruity Cabernet Sauvignon. The idea is to echo the blended wines of an earlier era in Napa. Added to that is a crisp yet opulent and complex Sauvignon Blanc. 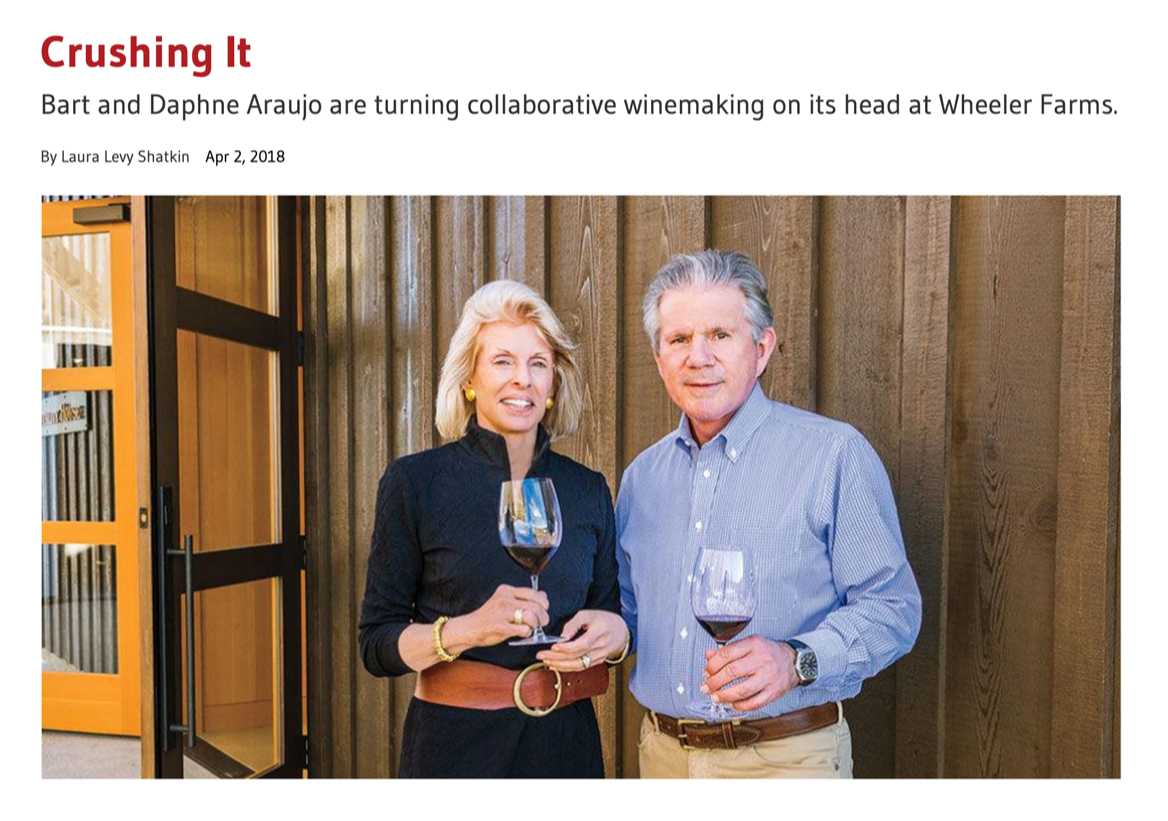 After they sold the winery in 2013 to the storied Bordeaux estate Château Latour, the Araujos hoped to give back to the industry that had supported them wholeheartedly. Bart also had a wealth of winemaking savvy to share. "After having a winery for 27 years, we had a sense of what was necessary to produce wine at the highest level," Bart says. He set out to craft an atelier of sorts, where a handful of winemakers would collaborate. 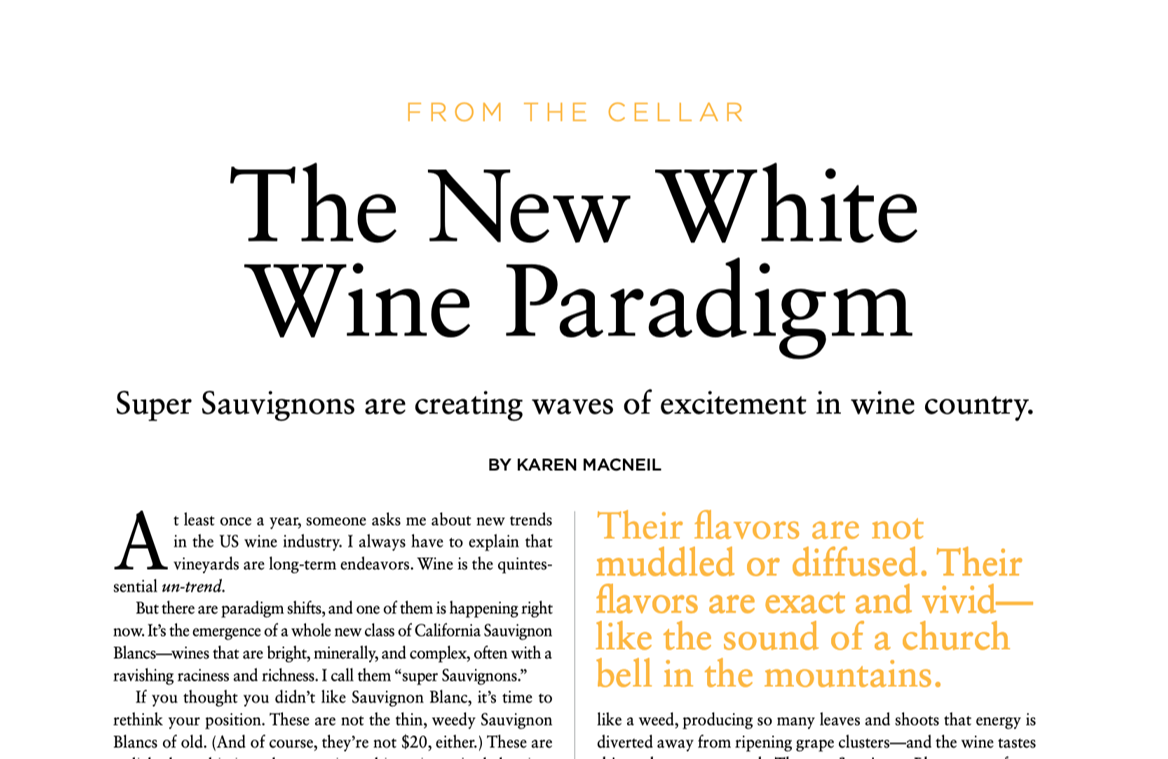 In the Napa Valley alone, there are currently more than 25 Sauvignon Blancs that cost more than $50 a bottle. Sauvignon Blancs such as Illumination, Accendo, Lail Vineyards “Georgia,” Araujo, Matanzas Creek “Journey,” Rudd, and Spottswoode are at the forefront of this new style of Sauvignon Blanc that’s the most exciting thing happening right now with white wine in the US. 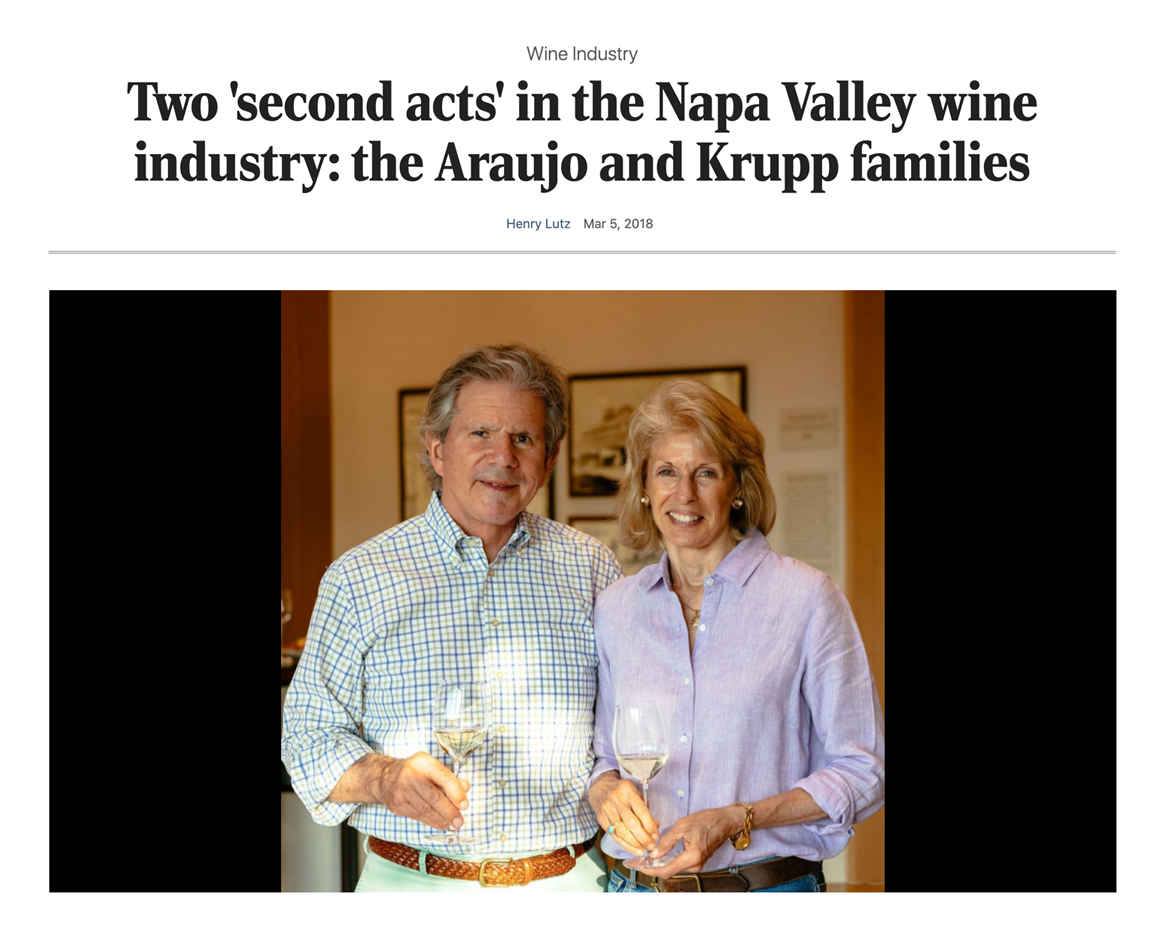 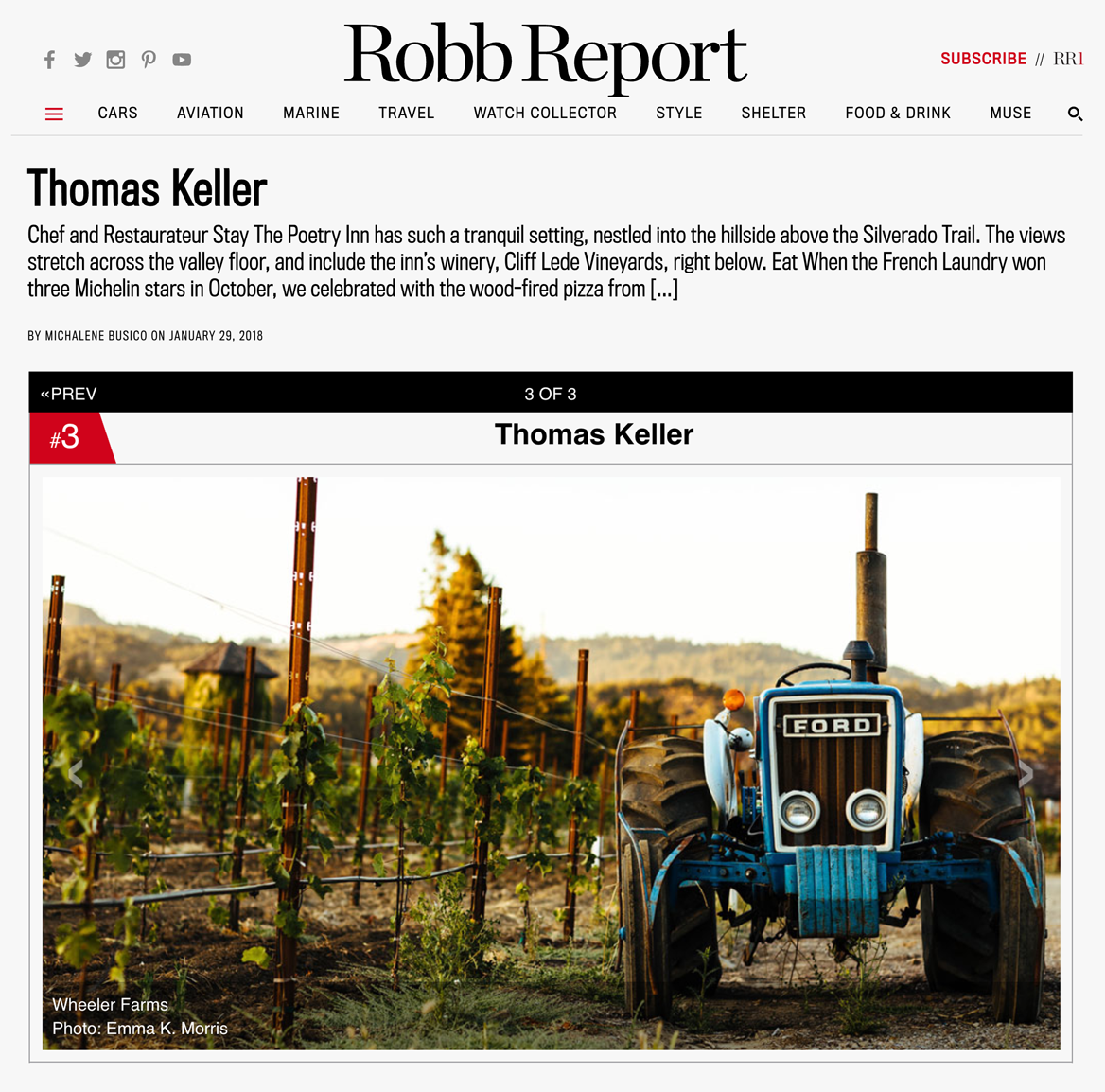 Make an appointment to visit Wheeler Farms, a new winery and farm in St. Helena. After a tour of their flawless gardens and winery, taste their Accendo Cabernet Sauvignon and Sauvignon Blanc with snacks made from whatever is fresh from the garden. ~ Thomas Keller interviewed by Michalene Busico 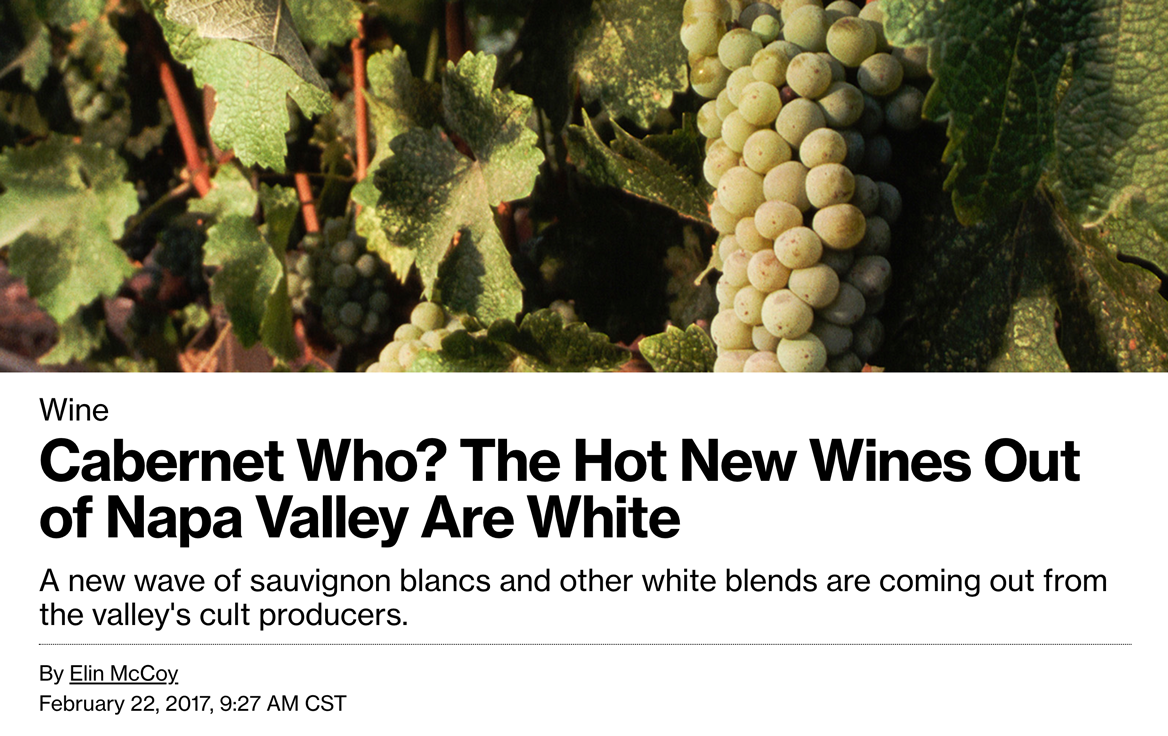 The Hot New Wines out of Napa Valley are White 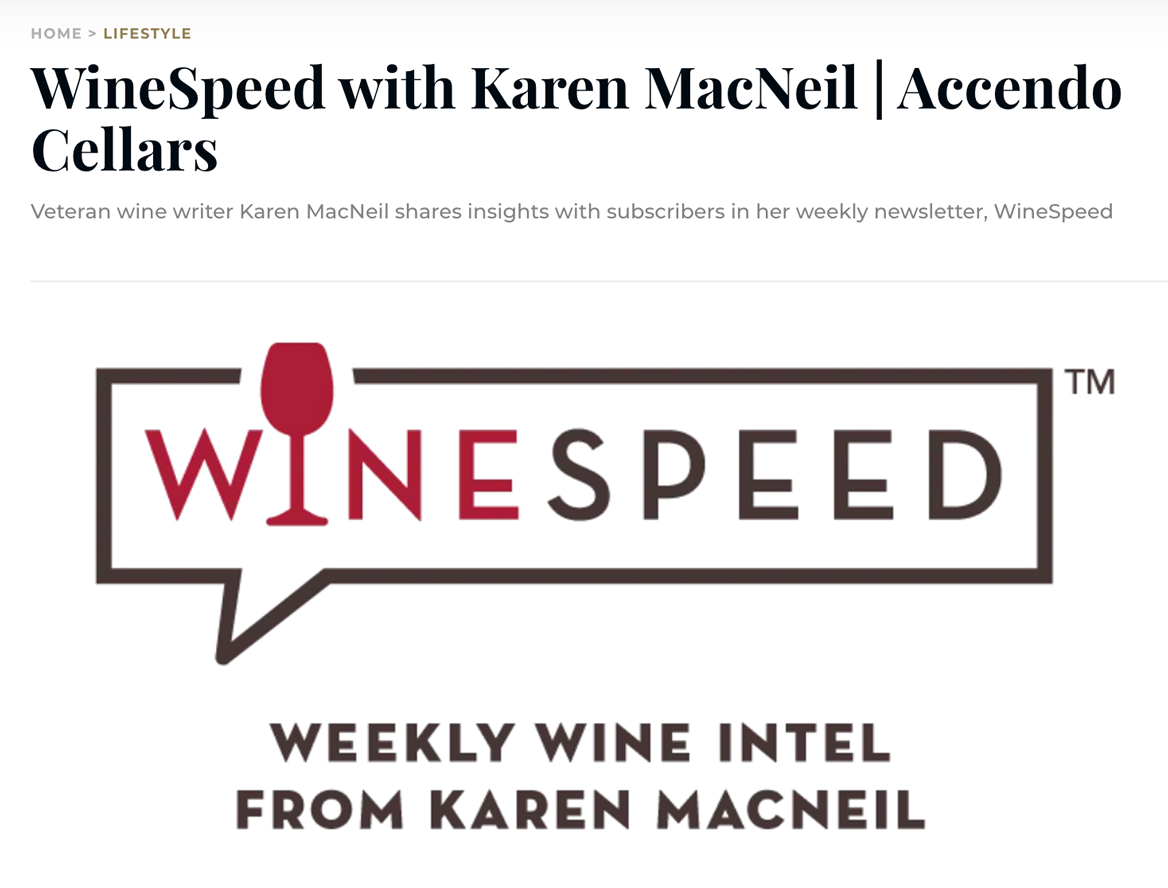 Bart and Daphne Araujo sold their prestigious Napa Valley winery Araujo to First Growth Château Latour in 2013. Accendo (pronounced ah-CHEN-doe) is their new venture, and this is the very first vintage of the cabernet. The wine is majestic. Simultaneously restrained and yet bursting with internal energy, it’s a racehorse stamping in wait for the gate to be flung open. The dark, woodsy aromas are intoxicating. The flavors—spicy, primordial andexotic—are vividly precise. The word Accendo means to kindle, illuminate, inflame and arouse. A must try—right? 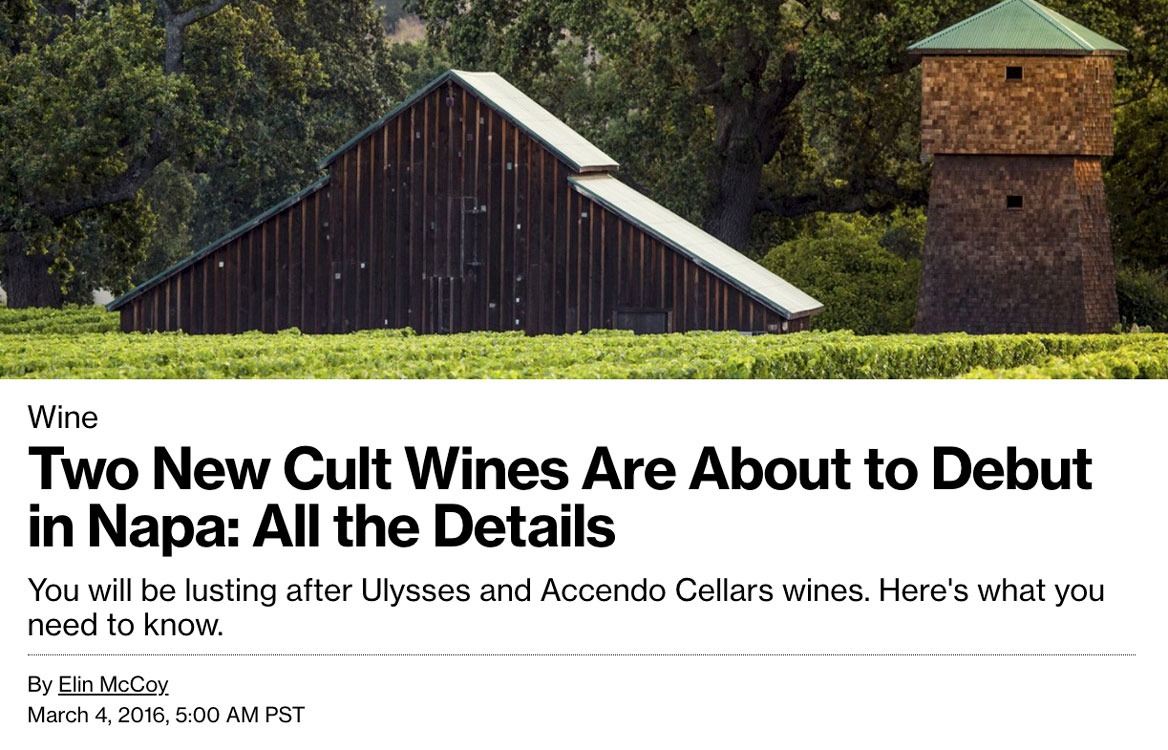 Two New Cult Wines Are About to Debut in Napa: All the Details

“We decided to do something different,” said Bart. Instead of a single-vineyard cabernet like Araujo Estate, the first Accendo Cellars red is a blend from five top vineyards, including a couple that the Araujos own. This uber-blend (as they call it) harks back to Napa’s history in the 1960s and '70s, before astronomically priced single-vineyard wines became the rage. 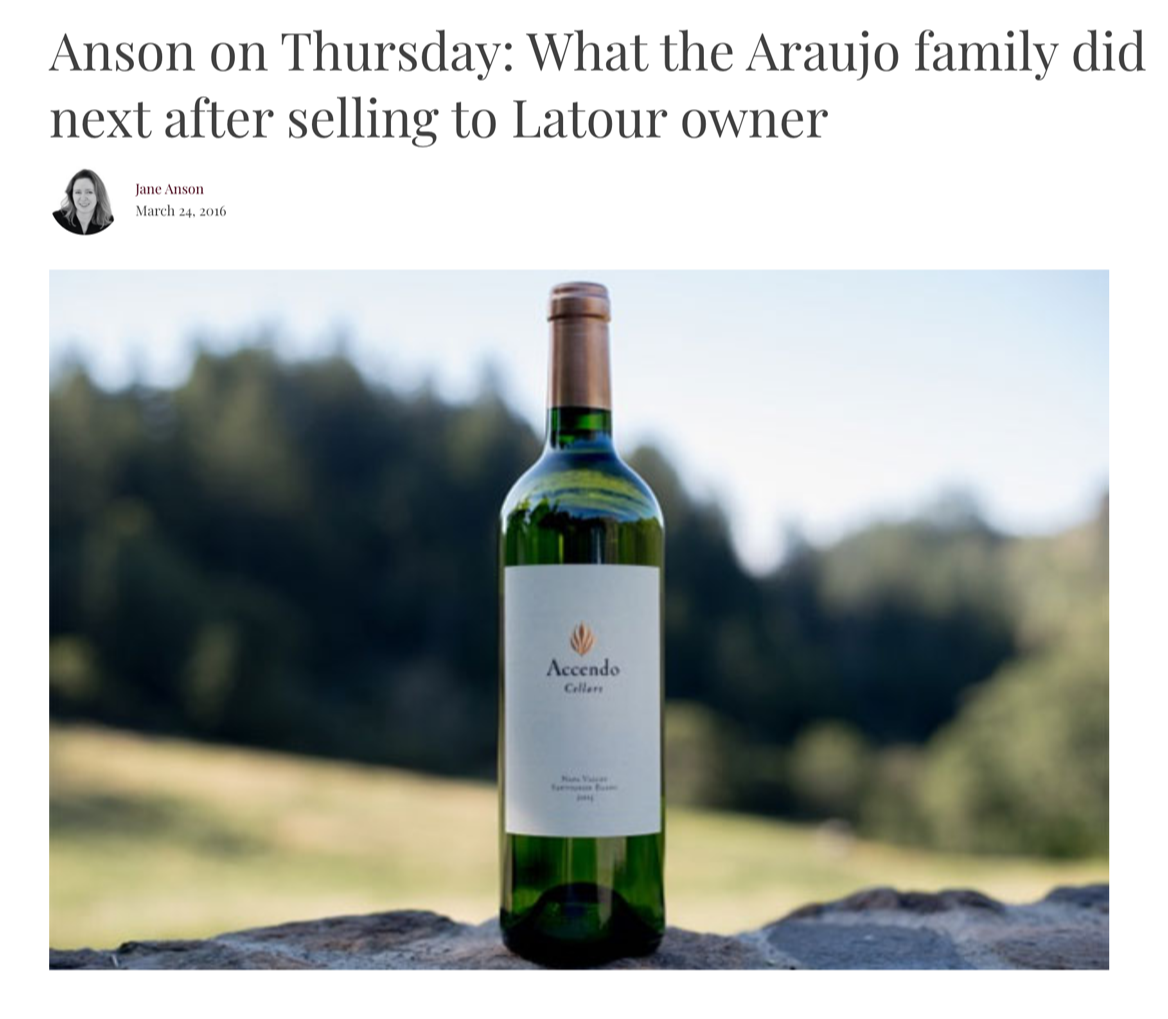 Anson on Thursday: What the Araujo family did next after selling to Latour owner

Bart and Daphne Araujo have started again after selling their namesake California wine estate to one of France's richest men, Francois Pinault, who also owns Château Latour in Bordeaux. Jane Anson finds out about the new Araujo wine venture - and predicts good things to come. 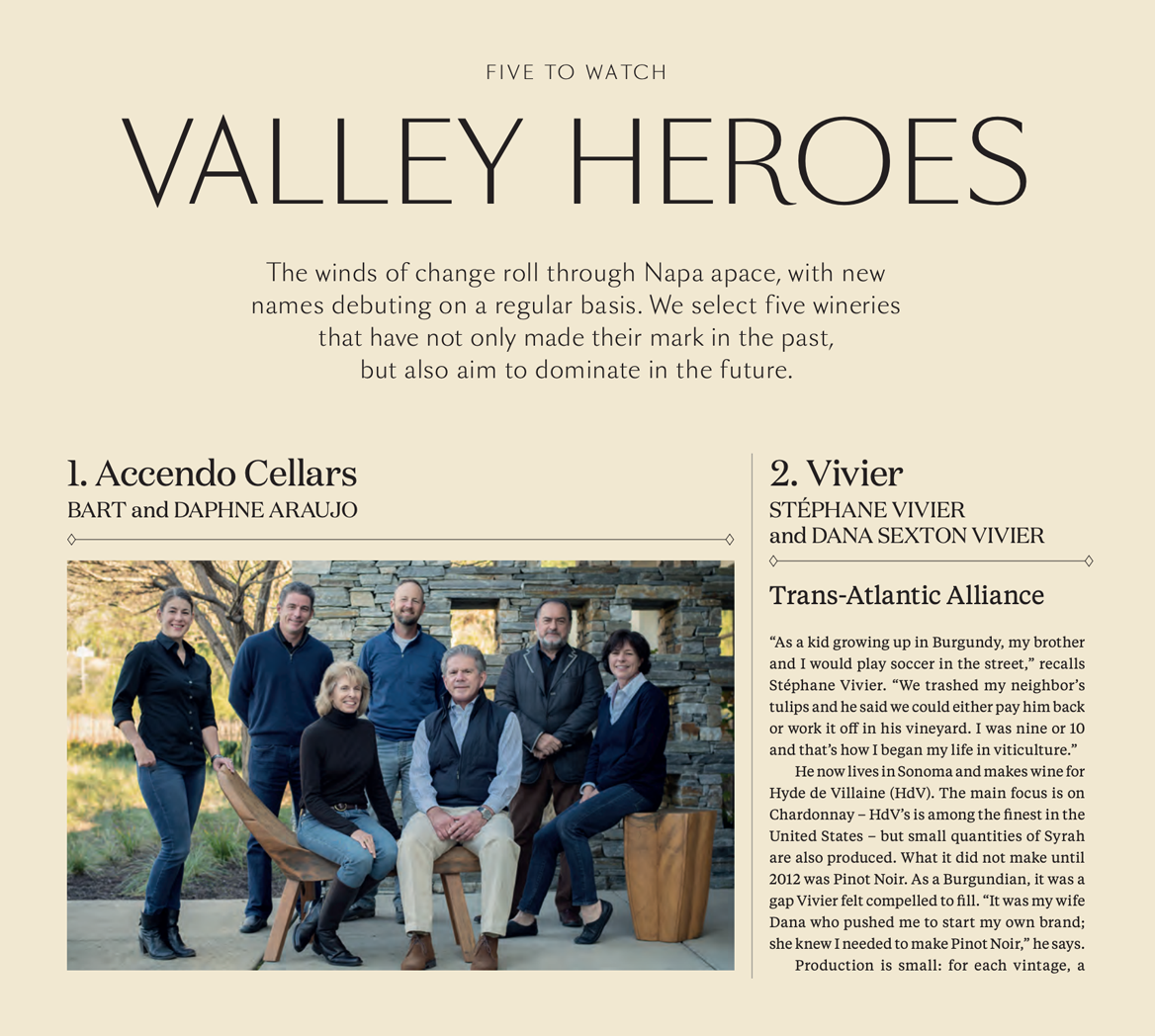